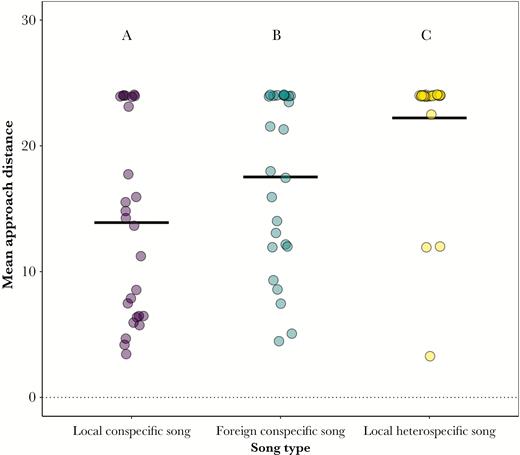 Understanding the causes and consequences of divergence in mate recognition traits has long been a fundamental question in evolutionary biology. In songbirds, songs are culturally transmitted, and cultural divergence can generate discrete geographic variation in song (i.e., dialects). Understanding how responses to within- versus across-species variation in songs changes across life stages may shed light on the functional significance of population divergence in learned traits. Here, we use a novel combination of song playbacks to adult and nestling golden-crowned sparrows to compare responses to local conspecific, foreign conspecific, and heterospecific songs prior to and after song learning. We found that nestlings respond equally little to both foreign conspecific and heterospecific songs. By contrast, the response of adult males to foreign conspecific songs was stronger than their response to heterospecific song, but weaker than their response to local conspecific song. Our study suggests that early local experience may interact with conspecific biases prior to song learning, in a way that has not been previously documented. Our results illustrate the importance of studying behavior at multiple life stages in order to better understand the effect of early experience on cultural and biological evolution.